A young police officer’s mishap over-identification of a ‘tooth’ is making the rounds in police circles these days to the extent that some say policemen should be given specific training on how to identify human teeth compared to animals during their mandatory training stint.

The new recruit officer who was deployed in Kandy randomly stopped a businessman at D.S. Senanayake Street in the city centre and found a tooth in his pocket. The businessman told the police officer it was his since had to undergo a tooth extraction a few days earlier and the dental surgeon gave it to him at his own request.

The young officer who felt he had stumbled on a solid case suspected that it was an elephant's tooth which might cost millions of rupees as most elephant parts are sold on the black market at exorbitant rates.

Despite the efforts by the businessman to prove his point, the police officer did not seem to be moved and called his superiors who also suspected the tooth to be of an elephant's. The Kandy perehera had been going on durig the week, after all and there were plenty of elephants in the town.

Finally, another senior high-ranking official had to attend to this issue amidst his busy schedule and the businessman had to provide a certificate from the dental surgeon who carried out the extraction procedure as well.

The whole saga took hours before said the businessman cleared his name and left the scene. He lamented among his friends that police should be given training on the identification process on various matters, including dental matters before being deployed on duty.

School boy robs neighbour to give gifts to girl friend

Boy who stole bus to impress girlfriend walks out scot-free 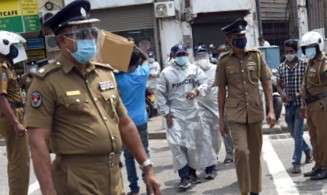